This past Saturday morning (12/22/07), an extra was called by the Providence & Worcester from Plainfield to Willimantic, CT with some interchange traffic for the New England Central. So I headed up to Plainfield in the pre-dawn hours to meet up with friend and fellow photographer Bob LaMay for a morning of chasing trains and photographing them. As usual, things wouldn’t go as planned – and even threw us for a loop at one point. The moral of that part of the story is this – don’t always trust what you hear.

The morning started when I got up to Plainfield, CT and Bob wasn’t there. The train hadn’t started work yet, so that was fine. A little while later, a pair of locomotives came down from the engine house to get their train.

Apparently their train was already made up with the marker hung, so they’d only need to couple onto it, do a brake test, arm the marker and head west to Willimantic. While they were coming down, I got a hold of Bob – he had a late start and was on his way. We’d meet up somewhere along the way.

Not long after coming into view, the train made their way onto the Norwich Main

At the switch, the conductor got off and watched his train roll by

And once it was lined back for the main, he got on for the shove back to north of the switch to the Willimantic Branch (remember, there’s no longer a diamond there).

He then threw the switch for the Willi branch, and got on beginning their trip west

A shot of the train passing the new retaining wall

And a shot looking down the tracks towards Route 14A

From there I was headed to Packer’s Pond. On the way I got a hold of Bob – he was nearing the same spot. As I got there, he was just getting out of his car. So we both made the trek to the snow covered side of the pond, waiting for the 10 MPH train. A few minutes later, the train rolled into view, passing the frozen pond

Now to head south. But as I took a left, I noticed Bob took a right. After thinking for a minute, I figured he knew about something I didn’t. A quick turnaround, and I find Bob at a bridge with a nice view of the P&W over the same river. So I parked behind him and we waited. And waited. Seemed that we got way ahead of them – not too hard when the train is only doing 10 MPH max. Finally, we heard the train roll onto the bridge

From there, we set our sights on Versailles. We got there ahead of the train, or so we thought. While waiting there, we heard what we thought to be horns to the west. Holy crap, how did the get ahead of us? So we sprinted west. But as we crossed the tracks in Baltic, something caught my eye – rust. The rails at Route 97 were quite rusty. Odd. I kept on going, but as I was heading west, it just didn’t add up. We were doing at least an average of 40 MPH, and the train was doing only 10. I got to the Scotland Dam and looked again at the tracks. More rust. There hasn’t been a train here in a while. Plus now the scanner was quiet – previously I was picking up the train’s EOT marker. Now nothing. I took a gamble and headed back to Baltic.

As I got to the crossing, my feelings were confirmed – the rail heads were now a bright silver! Yep, we didn’t miss them – it must have been an echo we were hearing. So a quick sprint back to the Scotland Dam was in order.

I called Bob with my findings – he was already in South Windham, and would hang out there. So I pulled over at the dam and my made my way down to the tracks, and hiked a ways down past the dam. I only had to wait a few minutes before the sound of the GE/EMD combo came echoing up the Shetucket River valley. Moments later, the train rounded the bend ahead of me

And a going away shot

Then the entire train heading away from me

And as the train headed along the Shetucket, I got a long telephoto shot

As the train slipped off into the distance, I gave Bob a call with an update, and I decided to try to catch the train in South Windham at the Route 203 crossing. So I made the hike back to the car, and headed towards South Windham.

As I pulled up to the crossing, the lights activated and I heard horns to the left. Damn, not in time. So a quick turnaround was in order, and I decided to head for Plains Road.

As I approached the bridge on Plains Road, I saw Bob standing there waiting for the train – good I didn’t miss them. I parked the car and made my way up to the bridge with Bob.

As we were chatting, that familiar GE/EMD rumble got louder, and the train began crossing the river

A swap of direction, I got a vertical with more of the river in the frame

Then a quick run back to the cars and our next destination – just to the south of the Frog Bridge.

We got there well in advance, and scouted the angles. After a bit, the train headed our way, but in a slightly different configuration. It looks like they coupled the lead locomotive onto the cars the NECR left, and shoved them, while pulling the cars from Plainfield down into the yard. The first shot I got was of Bob getting a shot

And as the train got closer, I got a shot of the cars, with the conductor on the lead car

Then a shot of the power, now mid-train, passing by

A quick ride to Bridge Street was in order. We got there as the train was approaching the switch onto the NECR main. I got a couple shots of the conductor waiting to move the train over the switch and onto the main, while leaving the cars from Plainfield at the switch.

Since the train most likely wasn’t going to be fully crossing Bridge Street, Bob & I decided to head back to the previous spot and get a shot of the train passing under the Frog Bridge. We got there well in advance of the train leaving the yard – they had some switching to do in the yard to pick up another car.

Finally, the train was ready to head south, and they started their move down the NECR main. First up is a square crop of the train as it passes under the bridge, whose frogs now sport scarves in the winter months 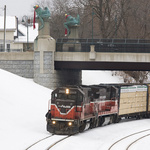 Then a vertical framing of the train & frogs

And finally my favorite of the series – the train fully cleared of the bridge and the frogs, still sitting in the background with their scarves

For ha-has, I got a trio of going away shots. First up with the conductor on the steps

Then with the tracks leading away from the train

And finally with more of the long hood, and some heat distortion coming out of the top of the EMD

As the train rolled past us, I looked at my watch – I needed to take off to run some errands (had to get a few more Christmas gifts for the girls). So I bid Bob farewell – he was off to the Scotland Dam next – and I made my way to Benny’s in Norwich to finish up my Christmas shopping. Not a bad morning chase.