Well, Friday I looked at the weather – cloudy but cold. OK, that would work. So I took a half vacation day from work and headed to Essex, CT. The Valley Railroad (aka Essex Steam Train) was running a pair of Santa Specials for the kids. They get to ride with Santa to Chester and back to Essex. I figured with the cold weather, I’d get some good smokestack plumes, and the cloudy skies would act like a big soft box, not limiting my photo angles. Would I get my early Christmas present? Time will tell.

I got to Essex just as the first train of the day was finishing up boarding. The first shot of the afternoon wasn’t your typical shot of the train, but rather I got a shot of the fireman chatting with one of the conductors.

BTW, the fireman may look a bit familiar – I rode with him in the cab back in July. Anyways, next up was what you’d expect – a boy pointing at 2-8-0 #97, probably talking about how he’s looking forward to the train ride with his mom.

As the final boarding call was announced over the loudspeakers at Essex Station, I got into my car and went to my first photo spot just north of the station – Old Deep River Rd.

I got there well in advance of the train, so I scouted around a bit. A couple angles struck me – first a longer telephoto shot, then I figured I could back up while changing lenses and get a wider shot as the train rounded the bend. As I was finalizing my decisions, a loud whistle to the south told me to get ready – the train was crossing Route 154 and heading my way.

A couple minutes later the train came into view, slowly accelerating the train towards me.

And it grew closer still, so I got my last telephoto shot as the train approached the curve in the rails

As the train continued to get closer, I gingerly went down the ice & snow covered hill while swapping the telephoto for the wide angle. As I got into position, I snapped a few frames of the passing 2-8-0, with one standing out amongst the series.

As the train went through the grade crossing next to me, I climbed in the car and set my sights on my next destination – Essex Street to the north.

I got to the crossing just as the train was coming into view. But the shot I had in mind wasn’t at the grade crossing, but rather across the river through a clearing in the brush. I pulled off the road just as the crossing signals activated. So I grabbed my camera, and went for the small boat launch where I’d get my shot. But it was a bit more complicated than just sit and wait. As I approached the ramp to the water, I was reminded that southern Connecticut got more ice than snow, and when my boots slid on the surface instead of sinking in I started to panic a bit. See, there was nothing to grab on and I was heading for the water, the train was coming, and I was loaded down with camera gear. Some quick stutter steps towards the side, and I was able to grab a branch in time to catch my balance, get on some level ground, and get the shot off.

Phew! OK, now back up the icy hill to the car an onto the next stop – Deep River Landing.

I got there just as the train was pulling through, heading north to Chester. So instead of trying to get a grab shot, I passed and scouted around. They’d be back. While scouting around, I found the angle I was looking for.

A few minutes later three whistles sounded to the north – the train was beginning its reverse move back to Deep River Landing, where #97 would run around her train and pull the consist of parents, kids and Santa back to Essex. So I got into position and waited for the train.

Finally it came into view, and I got a quick telephoto grab shot.

Then I swapped to the wide angle and got the first shot I planned out – a horizontal with some benches in the foreground, and the train in the background.

After that shot I headed for the rocks near the crossing. Scaling the icy rocks wasn’t an easy thing, but what the hey – it was worth it. Got a shot as the power was pulling away

Then a shot of the engineer & fireman passing by

And a tighter shot of the fireman riding the tender

As the tender cleared the switch, the engineer watched for the signal from the fireman to proceed back over the switch, and into the siding.

Moments later, he got his signal, and they proceeded back south onto the siding. Got a shot with the fisheye here

Then a swap to the telephoto, I got a shot of the conductor getting back onboard, with a couple watching the action in the vestibule. Also in the background is #97 making their move to the other end of the train

And over to the coal loading area for a shot of the pit, and the GE centercab switcher

Then something caught my eye – two men working on #40. So of course I had to get shots of them working. 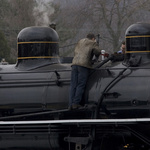 As the locomotive progressed south, I got a shot of her and #40 in the same frame

Then of the fireman waiting for #97 to make her way over the switch, heading back to the north end of the train

This next one, I’ll have to admit that I didn’t notice it at the time I took it. Nearby the south end of Essex, there’s a restaurant called the Iron Chef (not that it matters, but one of my favorite shows is Iron Chef – both the classic Japanese subtitled version, as well as the newer Iron Chef America). So I got a shot of the Iron Horse and the Iron Chef

And the next one I did with black & white in mind

Finally a shot of the engineer leaning out his window

A quick walk to the north end of the station, I got there in time to witness the fireman backing the train up to the coaches

And a boy watches the action

Next the fireman connects the steam heat line

And the completed connection, with steam now flowing, heating the coaches behind

Looking at my watch, I had time to get one more shot. So I headed back up to Old Deep River Road. I got a trio of shots with the wide angle of the train coming around the bend.

And one final shot of the train heading through the crossing

Not a bad afternoon. With the light fading, I got in the car and headed back home for the evening.

5 thoughts on “Steam and Santa”