Today was a bit different than usual – not only was it sunny and above freezing, but I had some visitors on my usual photography jaunt – a few folks from the Ocean State decided to shoot the Providence & Worcester along the Norwich Branch. They started the day in Plainfield, and we met up in Groton a bit later on.

This morning, I got a call from Nick Palazini – he, Ron Chouinard and Jon Guilbeault were leaving Plainfield chasing NR-2, so they gave me a heads up on the train’s departure. We had arranged to meet up at the USS Nautilus overlook park ahead of the train, so I figured I had a good 20 minutes before I had to head out. So I finished up some work and headed north to the park.

As I got there, the trio was already there waiting in the parking lot. Once I pulled in, we all exchanged greetings and settled in for a bit of chat before the train showed up. Not long after we started our conversations did we hear horns to the north, followed by NR-2 reporting that they’re south of MP5. That meant the horns were from Dow Chemical, and we had a few minutes before the train would be in front of us. That was a good thing, because the tracks were still in the shadows. A few more minutes should throw some sunlight on most of the causeway in front of the first nuclear submarine.

A signal maintainer works on the grade crossing signal at the US Navy Submarine Force Museum in Groton, CT as NR-2 approaches
REF#:20071228-_MG_8054.jpg
View in the gallery

A few moments later, NR-2 came through the crossing, giving a nice reflection in the calm waters in front of us

Providence & Worcester train NR-2 rolls past the USS Nautilus at the US Submarine Force Museum in Groton, CT
REF#:20071228-_MG_8065.jpg
View in the gallery

As the train was rolling past, the way the shadows were still across the tracks, along with the moon hanging low in the sky. As the trailing power slipped into the shadows, I snapped a shot with the moon in the upper right corner of the frame 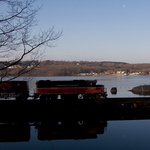 And I took another shot a second or so later that I had intended to crop rather tight. It’s a shot of just the reflection of the trailing power, along with the moon, in the water.

Next up the three amigos from RI wanted to head to the overlook south of the Thames River drawbridge. So that’s where we headed.

We got there as NR-2 was approaching the signal at the top of the Groton wye. It looked like we didn’t have long to wait as the Amtrak Shore Line dispatcher was getting the train right out on the corridor with a wait. A minute or so later, NR-2 made their way onto the drawbridge

As the train was heading for the New London side of the river, I snuck a shot of Nick shooting the freight crossing the river

As the train left view, we headed for the next spot right across the Thames from the New London station and Shaw’s Cove.

We got there just as the train was approaching the station. As Nick and Jon got their shots, I got a shot of them in action

Sorry Ron, I didn’t get a good one of you in action. I promise I’ll get one when I visit the Valley sometime in the near future!

Next up I worked the moon into another shot. This time a wider shot with the moon at the extreme top, and the train lost in the clutter of the city below

And back to the tighter shot of the train stretched out over the Thames River drawbridge.

Listening to the scanner, it sounded like Amtrak train 190 was heading for Shaw’s Cove. A minute later 190 came into view, and I got the first shot of it rolling onto the bridge over Shaw’s Cove, with a fishing boat in the frame

And a bit wider, again with the entire train stretched out over the swing bridge

As the passengers boarded across the river, Nick, Ron & Jon decided to head north to try and catch NR-3 heading out of Plainfield. So we bid eachother farewell – they headed north, and I headed south to the office for the rest of the day.