Just like I did this time last year, I’ve gone through my catalog for the year 2008 and picked out some of my favorites.  But unlike last year, I’m a bit late with this – now that we’re near the end of January 2009.  But, hey, at least I put something together…  Sure, they may not be award winners, or even technically excellent, but they are some of what I thought was my better work over the course of the year.  So here’s the shots I like the best from 2008 – 28 in all.

Like last year, I’ll talk a bit about each image, and if there is one, link to the original blog post from when I took the shot.  Here goes!

On Packers Pond –  (original blog post).  Ahhh, shooting from the wrong side of the tracks, if done correctly, will yield a sweet shot.  This is one that worked out rather nicely.  On the last daylight run to Willimantic, a P&W extra headed out of Plainfield, CT in the early morning, and Bob LaMay & I decided to chase it. For this shot, Bob went to the “right” side of the tracks, and I opted for the “wrong.”  In my eyes, I think the wrong was the right choice…

Under the Moon – (original blog post).  Night photography – something that is near and dear to my heart.  Well, the P&W helped that passion out by initiating  a new job out of Plainfield, CT, symboled NR-4.  The job handles the new interchange with the NECR in Willimantic.  Here, NR-4s power rests under the moon as the crew went out to get a hot coffee in Willimantic.  This shot also is the image for the P&W’s 2009 calendar.

Over the Diamond – (original blog post).  On a ride with Connecticut Southern train CSO-3, I decided to get a little creative as the crew did some switching inside of Hartford yard.  I had my monopod with me, and a cable release.  So I hung the camera down near the track level and snapped this shot of the first car rolling over the diamond inside the yard.  A much different perspective, for sure.

Bound Brook Sunrise – (original blog post).  With my new job, I’ve had to travel quite a bit to the northern New Jersey area, which luckily for me is chock full of railroading.  OK, maybe not chock full, but I’ve got Conrail, Norfolk Southern, CSX and New Jersey Transit all within a stones throw.  One morning before heading into the office, I stopped by the Bound Brook NJT station for a bit.  I got this shot of an express speeding through the station as the sun was starting to come above the treeline.

Power – (original blog post).  A quick run up to PanAm Railway’s East Deerfield yard after taking the family to Magic Wings yeilded a pretty nice surprise.  PAR made a light engine move of 8 units into the yard from the east.  I really liked this one shot of the entire string of units backing into the pit area of ED.

Kingston Bound – (original blog post).  On a Catskill Mountain Railroad photo charter put together by Railroad.net‘s Otto Vondrak, I took this shot of a milemarker near Kingston Plaza in Kingston, NY.  You see, this was the first revenue run past this milepost in quite a few years, and I wanted to capture the historical moment of it.

Hurricane through Boca Raton – (original blog post).  Had to have some Florida East Coast Railway representation in here.  This is my favorite from this year’s visit to my parents in Deerfield Beach, FL – a shot of FEC train 123 heading south through one of the few curves in the area, near the Boca Raton/Deerfield Beach border.

Bethlehem Steel – (original blog post).  On another trip to NJ for work, I decided to take a quick trip to the west – Bethlehem, PA was only about an hour from the hotel I was staying in.  While I was there, I caught three trains – two NS road freights, and one Lehigh Valley.  This one the LVRB switchers brought out the NS interchange traffic in the shadow of the old Bethlehem Steel blast furnaces.  Really liked the industrial look of this… 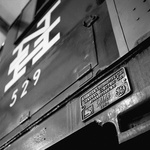 New Haven Lives – (original blog post).  This past May I was asked to photograph a Boy Scout Camporee at the Railroad Museum of New England.  Well, I not only brought my digital gear, I also threw my Rolleiflex in the bag.  This shot, of RMNE’s ex-NH RS-3 was one of those film shots.  Yes, the shallow depth of field was intentional – wanted to focus on the builder’s plate, and not the iconic “NH” on the side of the cab. 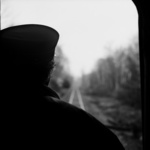 Looking over the shoulder of a Railroad Museum of New England conductor as he watches the shove move.
REF#:2008-05-03-RMNE-conductor-rear-platform-TMY.jpg
View in the gallery

Over the Shoulder – (original blog post). Another shot from the Boy Scout day at RMNE from the Rolleiflex.  Here the train is shoving out of Thomaston Station towards the RMNE shops.  I got this shot over the shoulder of the conductor watching the shove move.  Another intentional use of shallow depth of field.

25 Ton Turn – (original blog post).  Of course, more night photography.  Here’s a shot from the 5th annual CERM Night Photo Shoot.  This year sported a rainy night, but luckily the heavy stuff stayed away.  I like this one because it not only shows off a couple of the museum’s locomotives, but also the newly dedicated working turntable, and roundhouse.

New England Central train NERWNE, travelling as light engines, rolls onto the trestle over Smith Cove in Waterford, CT on a foggy morning
REF#:20080616-_MG_0325.jpg
View in the gallery

Geeps in the Fog – (original blog post).  One of my moody shots.  I came across New England Central train NERWNE heading north on a foggy morning through Waterford, CT.  The first shot I got was of the train, simply a pair of light engines, heading north past Smith Cove in Waterford.  In the background is the US Navy’s Sub Base across the river in Groton.

Bye Bye Bridge – (original blog post). For the past two years, I have been photographing the progress of Amtrak’s Thames River drawbridge replacement project, and one of the final images of the old span is my favorite.  Here we see a tug towing the moveable span – in place since the bridge’s completion in August 1889(story here from the New York Times) – past the New London lighthouse in the Thames River.

Independence Day 2008 – (original blog post).  Our family makes it a point to get to our town’s 4th of July fireworks each year, and 2008 was no exception.  This one I liked because the fireworks lit up the viewing area, showing quite a few cars watching the annual show, celebrating our independence.

Pony Camp –  This one is a two-fer.  My daughters attended a three day pony camp this past summer to learn some basic horse sense, along with a bit of riding.  These are two of my favorite shots of the girls enjoying themselves!

All Aboard! – (original blog post).  With my new job, and the company eliminating the air shuttle to New Jersey, I’ve moved to taking the Acela to and from NJ – it sure beats driving!  So while waiting for my train at Newark Penn Station, I’ve shot there a number of times.  This is one shot that just struck me as it was happening – a NJ Transit conductor waiting for the passengers to board before giving the engineer the go-ahead to head out of the station.

Ghost Train – (original blog post). In between shots at organized night shoots provides plenty of opportunities to get creative, especially as the crews move equipment around.  This shot, taken at the Berkshire Scenic Railway Museum’s night shoot in August, was of the museum’s S-1 pulling across my frame, and of course, I intended to keep the exposure going after the train pulled out, to give it the see-through ghost-like look…

P954 passes by the waterfall & mills in West Warren, MA
REF#:GMA-07.jpg
View in the gallery

Good Morning America – (original blog post).  In September, ABC’s Good Morning America chartered a special Amtrak trainset to begin the election season, and the show traveled on that train for a week around the northeastern US.  I caught the first move of the train past the waterfall in West Warren, MA.

Running Gear – (original blog post).  This past fall I picked up a Lumedyne flash system on eBay for a fairly inexpensive amount.  So of course I had to give it a field test, and one of those was down in Essex, CT at the Valley Railroad photographing their equipment under the stars.  I loved this one because it showed the intricacies of the locomotive’s running gear.

ROCK! – (original blog post).  In October I went with my wife’s nephew and a friend of his down to Toad’s Place in New Haven for a show.  Out of the whole night, I liked this shot the best – one of the band All That Remains lead singer Phil Labonte at the beginning of their set.  Obviously I wasn’t in the pit…no way I was going near there with a couple grand in camera gear…

Halloween Along the Thames – (original blog post).  The perch of the Mohegan-Pequot Bridge spanning the Thames River between Preston and Uncasville, CT affords a nice view of not only the Providence & Worcester tracks, but also the surrounding area.  Which includes the Mohegan Sun casino.  This fall day, with the colors finally starting to creep into southeastern Connecticut, I was graced with blue skies, and a little frost on the rails.  This shot made the 10 minute walk out onto the bridge well worth it.

Haunted Tractor – (original blog post).  Another annual tradition is to head down the road from the house to R-Farm and photograph their annual Halloween Jack-O-Lantern display.  This year didn’t disappoint, and I got quite a few keepers from my 2008 trip.

Waiting at the Frog Bridge – (original blog post).  P&W train NR-4’s schedule changed, and they’re into Willimantic earlier than they used to be.  Also, at this time, two NECR trains were also in town, and a 3 train meet was typical.  Here’s one of those instances.  NR-4 came into town as NECR NERWPA (the Palmer turn) was waiting to head north.  That’s WPA’s markers in front of NR-4 there.  Also, under the bridge, you can see headlights glaring off of the rails on the NECR main – that’s NECR train NERWNE pulling south, preparing to head out and work the south end of the railroad.

Newark Penn – (original blog post).  Another one from one of my many trips down to New Jersey.  Here’s a simple shot of the entrance to Newark Penn Station.  Actually, this took a while to time it right, and try to get only people, and no cars in the shot. 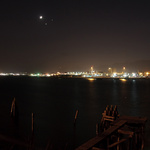 Heavenly Trio – (original blog post).  December brought a celestial conjunction – the moon, Venus & Jupiter, all appeared in the evening sky.  This shot I got along the Thames River with an old abandoned dock in the foreground, and New London across the river, as the trio made their way into the western sky, following the sun.

CNZR under the Stars – (original blog post).  Another evening out with the Lumedyne makes the top list. This time I headed out with Nick Palazini to shoot the CNZR in Bloomfield and East Windsor, CT and the CSOR in East Hartford.  This one shot, from Bloomfield, shows the CNZR power resting for the evening, with some joint bars in the foreground.  Just a composition I really liked.

BRRRRR! – (original blog post).  After a fresh snowfall, and on a cold, blustery morning, P&W train NR-2 was kicking up some snow as they rolled through Ledyard, CT.  Not much else to say here – just a classic shot on a cold morning.

And I think that wraps things up for 2008!  I hope you enjoy what I’ve pulled together, and we’ll do it again at the conclusion of 2009!