Yep, it’s been a while since the last post.  Busy time of year, between work and family, and Christmas and New Years it’s just been constant running around.  But I did manage to kick off the New Year, photographically speaking, early this morning down by the Lebanon Green in frigid cold.  The Quadrantid meteor shower was peaking around 3:30am, so I decided to stay up and try to capture a few.

Well, I didn’t see all that many streaking across the sky – maybe a dozen or so in the 2+ hours I was out in the field.  I did manage to catch one in a photo, though, so all wasn’t lost.  But as the time of the peak passed, I aimed the camera at Orion, Polaris and Ursa Major to get some different star trail shots while I was out and about.  Here’s the group of photos I’ve processed from the run out into the cold. 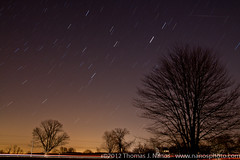 The one Quadrantid I caught on the camera
Look above the tree, and you'll see the one meteor I was able to catch. It's going from left to right. 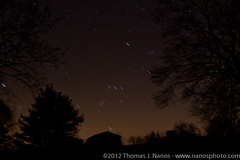 The Hunter and The Farm
Orion sets over a farm in Lebanon, CT 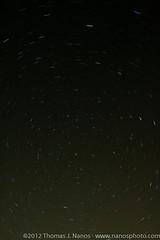 Spinning around
Looking due north at Polaris, as the Earth spins away. 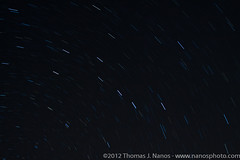 30 degrees, in 10 degrees for 11 minutes, 1 second
Ursa Major spins overhead in the cold Lebanon, CT sky. 30 degrees is the approx. width of the sky covered by the frame, 10 degrees was the temp, and the exposure was 11 minutes, one second long.

I’ll also be posting some more railroad photos soon – especially a bunch from the Valley Railroad’s North Pole Express trains I’ve been photographing over the past month or so.  Stay tuned for those.