Busy times lately – both at work and at home.  But I figured it was time for a quick blog post to stir things up a bit and let you all know where things are.  First off, you’ll see my work – both photos and writing – in a couple magazines’ March 2012 issues, one of which is the first time I’ve had my writing published in it.  Next, I’ve been scanning a few older slides of late, and posted a few for you all to enjoy.  And lastly, you’ll be able to see one of my prints at the Amherst Railway Society’s Railroad Hobby Show at the Big E in West Springfield, MA this weekend!  Read on for all of the details.

OK, we’ll go in order that I mentioned above.  First up is a pair of articles of mine that will be seeing print – one large and one small.  The small one appears in the March 2012 issue of TRAINS magazine, and leads off their feature on “Funky Freights” where I talk a little about the special shipments made to Electric Boat in Groton by the Providence & Worcester.  Appearing with that brief text is a photo I took of the load on its way south past Mill Cove in Ledyard – and the photo isn’t exactly small.  Nope, it spans two pages!  If you watch the March preview video on the TRAINS site, you’ll see the page with the “FUNKY FREIGHTS” title (click here for the TOC, and click the Look Inside link for Jim Wrinn’s video).

The second, and larger article, appears in the March 2012 issue of Railfan & Railroad magazine and is my look at the rebuilding of Valley Railroad’s newest addition to the roster – 2-8-2 No. 3025.  The article goes over the rebuilding process, along with a look at what’s in store for No. 97, which was taken out of service at the end of the 2010 season for her FRA mandated rebuild project.  This article ended up being 8 pages in length, and has a number of photos I took over the years of all three of the Valley’s locomotives – 40, 97 and 3025.

Next up is the Amherst Railway Society’s annual Railroad Hobby Show at the Eastern States Exposition (also known as the Big E) in West Springfield, MA.  The Friends of the Valley Railroad have graciously agreed to display my 3025 print, and distribute literature about how to purchase it (that info can be found here on the blog).  Of course, as I’ve mentioned before, I’ll be donating 20% of each print sale price to the FVRR for their restoration efforts.  So if you can, you’ll be helping to support a great cause!  And if you’re at the show, you’ll be able to check out the actual print.

Finally, a few slide scans for your visual enjoyment.  I’ve been grabbing random slides out of my binders and scanning them in from time to time.  Last night was one of those times, and I scanned a few in.  Here they are – subject vary from CSX to P&W to Morristown & Erie. 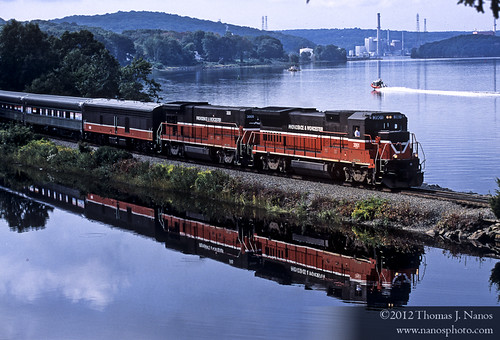 Passenger extra on the P&W
The Connecticut Eastern Railroad Museum in Willimantic, CT chartered a Fall Foliage extra on the Providence & Worcester Railroad on October 2, 2004. The trip started in Plainfield, CT, and traversed the P&W's Norwich Branch between Ledyard, CT and Worcester, MA. Here the train is heading back north through Ledyard, CT along Stoddard Cove and the Thames River. Also note heading south in the Thames is a US Coast Guard rigid hull inflatable boat. Taken on Fuji Provia 100 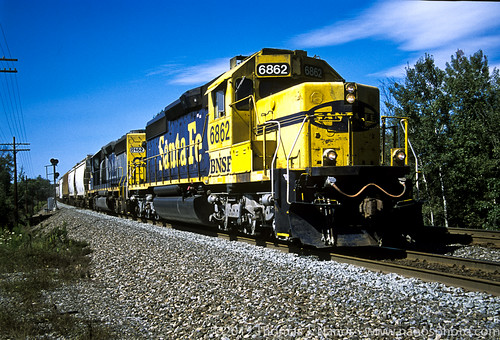 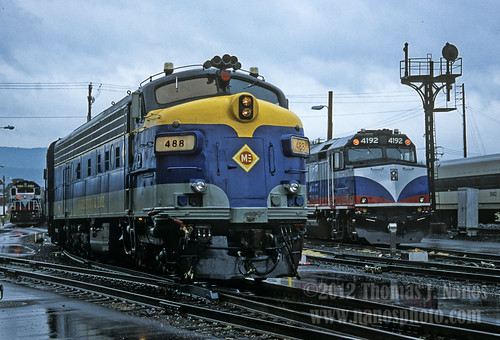 FL-9 in the Rain
Fresh from the paint booth, Morristown & Erie FL-9 488 sits in the rain at Port Jervis, NY after pulling a passenger extra into the MetroNorth yard. Spent the day shooting in the rain with good friend Bob LaMay, and this was also the first time I met Railfan & Railroad editor Steve Barry. Taken on October 4, 2003 on Fuji Provia 100 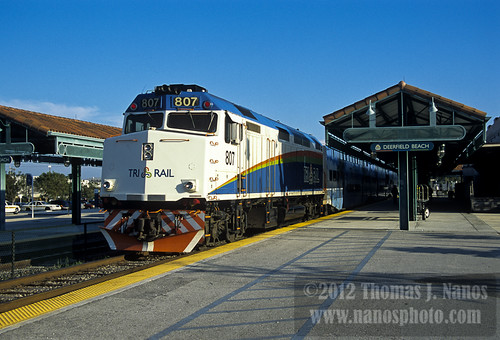 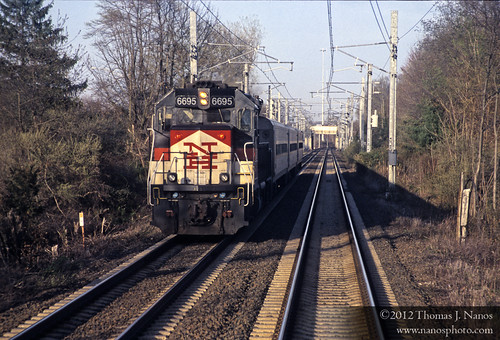 High Speed Commuter Meet
At a closing speed of nearly 160 MPH, I bagged this shot of a westbound CDOT Shore Line East commuter run, I believe, near Branford, CT. I was riding in the cab control car of an eastbound Shore Line East train - both of which were doing about 80 MPH. Shot on April 29, 2003 on Fuji Provia 400 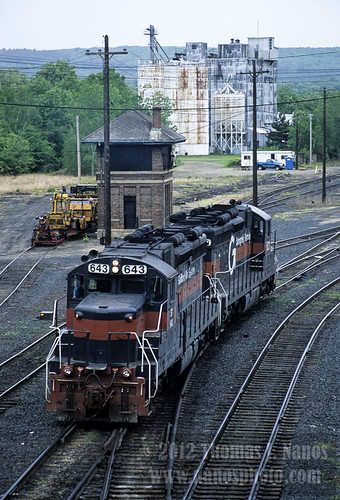 Dinosaurs in Deerfield
A pair of EMD SD-26s move through Guilford Rail System's East Deerfield Yard in East Deerfield, MA. GRS is now known as PanAm Railways, and I'm pretty sure these two locomotives are at the very least out of service, if not already been scrapped. Taken on May 31, 2003 on Fuji Provia 400 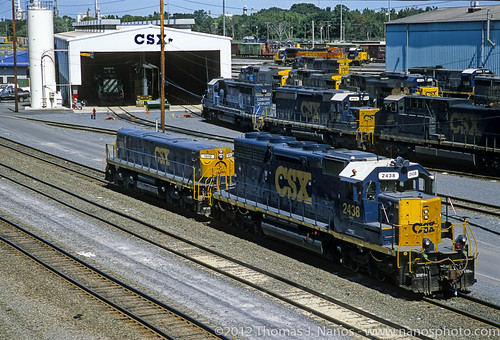 Selkirk Hump Job
The hump power at CSX's Selkirk, NY classification yard passes by a number of locomotives in the servicing and fueling area of the sprawling railroad maintenance facility. Taken on August 24, 2003 on Fuji Provia 100F