Managed to find a little time for a walk this morning, so I decided to head up to Poquetanuck Cove again on the Preston/Ledyard line and get a mile of walking in.  It was a little breezy, but not as windy as it was last week (here’s that post), so I could actually feel my hands and ears by the time I got up to the cove.  But in addition to that, I had a couple nice surprises with the arrival of the train – and not just its consist.

Thanks to a new radio feed put up by a fellow railfan, Kevin of Plainfield (click here for the feed), I got an accurate time on when NR-2 was southbound out of town.  Coupling that with a hole in my schedule this morning, I decided a quick drive north, followed by a nice walk along the Thames was in order.  As I got to the parking area at Stoddard Hill, there wasn’t much activity on the scanner, but I figured I should have just enough time to make the half mile hike north.

Once I got there, NR-2 reported they were south of MP12 – putting them about 4 miles north of my position.  After looking around, I decided to perch myself on the rock cut on the east side of the tracks, getting me up above the height of the train.  Didn’t have to wait long for NR-2 to come into view – but there were two surprises I alluded to before.  First, the 4005 was on the point, making for some nice photos along the Thames, but also tacked on the end of the train was NR-3.  The combined train made for an interesting target as they passed by my position.

Then further south, after NR-2 dropped the NR-3 off at Allyn’s Point, I got ahead of them and shot them in Fairview Yard from a new angle.  Something that struck my eye recently, and now that the Rawson hoppers are gone, is now possible.  After that, I had to get back to the office, so the chase was over – but I managed to bag a few keepers.  And here they are. 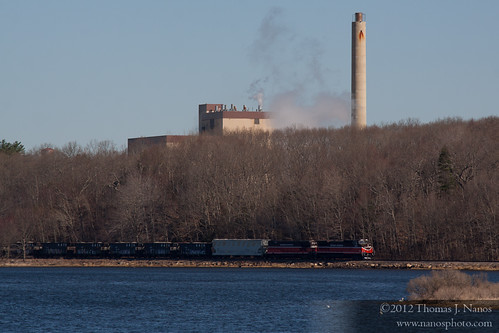 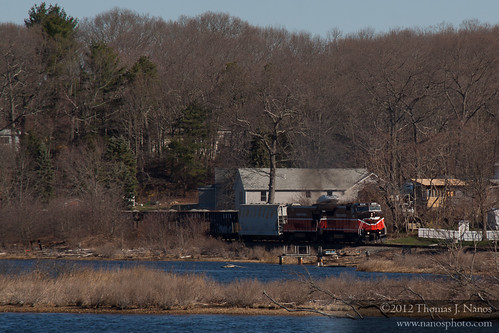 Two trains in One
A combined Providence & Worcester train - consisting of NR-2 on the head end and NR-3 at the rear - makes their way along the Thames River in Preston, CT.

NR-2/NR-3 through Happyland
The combined Providence & Worcester trains NR-2 and NR-3 head south through the Happyland section of Preston, CT 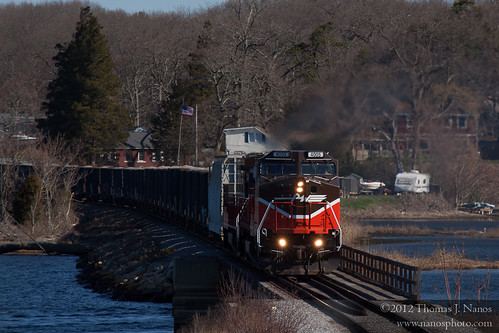 Into Ledyard
Providence & Worcester trains NR-2 and NR-3 cross into Ledyard, CT as they cross over the inlet to Poquetanuck Cove 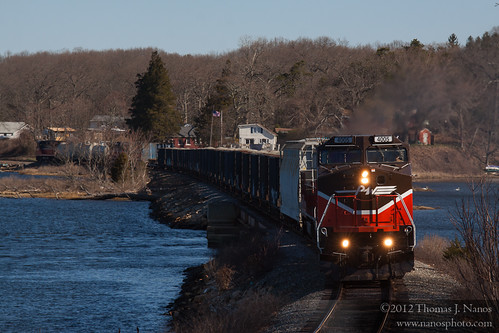 Train In Two Towns
With the head end of P&W NR-2 in Ledyard, and its tail end, along with NR-3 in Preston, the combined jobs continue south along the Thames River and Poquetanuck Cove. 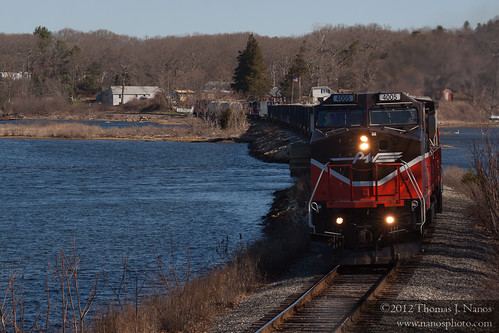 Train In Two Towns 2
Another view of the combined NR-2/NR-3 in Ledyard and Preston, CT 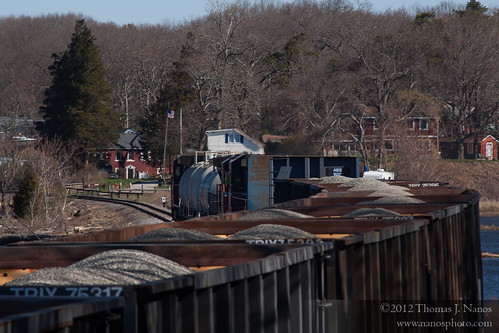 NR-3 closing in
Providence & Worcester train NR-3 heads for the Preston/Ledyard border near milepost 8 on the P&W's Norwich Branch.

Two trains in One 2
The combined Providence & Worcester trains NR-2 and NR-3 stretches out along the Thames River in Ledyard, CT 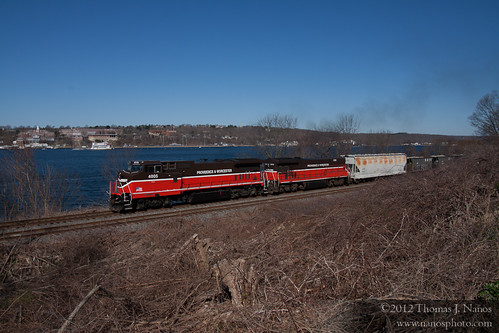 NR-2 at Fairview
Providence & Worcester train NR-2, now by itself after dropping NR-3 off at the Dow Chemical plant at Allyns Point, heads south along the Thames River in Groton, CT 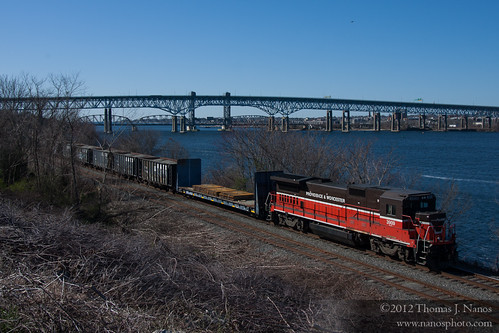 NR-2 and two bridges
The tail end of Providence & Worcester train NR-2 rolls through Fairview Yard in Groton, CT with the I-95 Gold Star Bridge and Amtrak Thames River lift bridge in the background.

One thought on “Two trains in one shot”