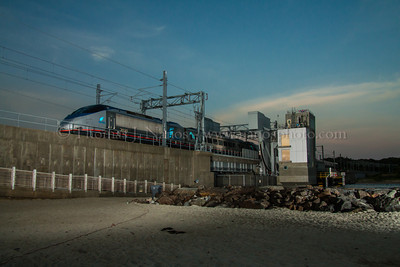 For today’s post, we’ll go back to the end of June when we as earthlings bore witness to the closest “super moon” of 2013 – or in more scientific terms the moon was at the perigee (closest to Earth) of its orbit while in the full phase.  Honestly, it’s nothing truly rare, despite the Internet hype that usually precedes its arrival – it happens once about every 14 full moons.  Even with the frequency of them happening, I wanted to photograph this event, but not just in the astronomical sense – I also wanted to include the railroad in the photograph.  And one spot sprung to mind where it would be possible – the new Niantic River Drawbridge on the Niantic/Waterford town line.

With June 23rd being a nice and warm summer night, we decided to make it a family shoot, and I brought along my wife and helpers (otherwise known as my two daughters) for the event.  We got down to Niantic a bit before sunset, giving us plenty of time to set up before the sun set, and the moon rose.  After gathering the gear, we made our way out onto the newly opened beach west of the now completely operational – and considerably larger – new Niantic River drawbridge.

As a part of the bridge replacement project Amtrak embarked on some years ago, the new bridge was constructed south of the original bridge, so the construction could continue without interrupting railroad operations.  The downside of that – from a purely photographic standpoint – is that put the track level quite high as compared to the beach.  With that difference in elevation, it was less than desirable to photograph trains passing by on the Track 1 side, as they’d be partially obscured by the right of way itself.  And with normal operations, Track 1 hosted the westbound trains, while the southernmost track – number 2 – carried the eastbounds.  And being on the west side of the bridge, that meant all of the shots on the track 2 side would be going away shots.  So to make things “appear” to be going in the right direction I’d have to settle on only shooting Acelas and Shore Line East commuter trains – both of which have locomotives on the west ends of their respective trains – giving the appearance of going in the “right” direction.

Time for a little side commentary.  Normally when I’m out shooting with the flashes, I’d be out in the middle of nowhere with a small number of people helping out and/or watching – usually myself with one or two others (lately my daughters, but more on that in a future post).  Setting up on the Niantic Bay Boardwalk and beach was quite a different experience – instead of the solitude afforded by setting up by the tracks in nowheresville, there were people everywhere.  And with people, come curious questions as to what I’m doing.  After explaining that I was setting up to get a photo of a passing train with the full super-moon in the background, I got nearly every reply you could think of.  They ranged from the supportive “great idea!”, which usually brought on other inquisitive queries, to the not easily impressed “why?” and even one “well, that’s pretty stupid.”  To each their own, I guess…

Now back to the time on the beach.

After setting things up, and getting a few test shots off we were greeted with an eastbound Acela just before sunset.  So I set up the shot to use both flash and get the sky’s still blue color in the frame, complimenting the blue and silver on the passing Acela trainset. After that train had passed by, we saw two others – both westbounds, so the shots really didn’t work due to the elevation difference.  But the one train I had in mind was an eastbound Shore Line East train heading to New London, which would pass by just as the moon was a little over the bridge’s structure.  After rearranging the flashes and getting off a couple test shots with the rising moon we were ready for the train to get there.

We didn’t have to wait too long before the commuter train appeared to the west, coming our way.  As they crossed over the drawbridge, my daughters decided to become part of the scene, running towards the camera.  I also got a random fisherman who was walking out towards the bay for a little night fishing.  The only downside was I was hoping the Shore Line East train had one of their classy New Haven painted GP40s, but instead it had a former Amtrak P40.

An eastbound CT-DOT Shore Line East commuter train heads over the Niantic River Drawbridge on the Niantic-Waterford town line as the moon rises in the east. Three flashes were used for this shot, and it was shot in one single frame.

With that shot in the bag – despite the less-than-desirable power, we broke the gear down, and headed back to the car for the trip home.  I got the shot I came out for – one with a passing train under the 2013 Super Moon.