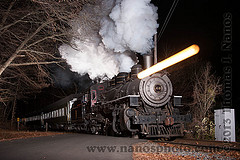 November 15, 2013 marked the start of the North Pole Express season at the Valley Railroad/Essex Steam Train in Essex, Connecticut.  And with the after-dark departures, spots in the towns of Essex, Deep River and Chester have been on my list of sites to photograph the steam train passing through the night.  This year, I decided to kick off the NPE season a little differently – this time with my daughter shooting along side of me.

My younger daughter Callie, who recently turned 9, came along with me down to Essex to photograph the first runs of the North Pole Express.  Usually my girls come along to help set up, and at times become part of the photographs I make (here’s a recent example).  But this time turned out to be a bit different.  After setting up the flashes around the Old Deep River Road grade crossing in the Centerbrook section of Essex, Callie asked me if she could also take pictures.  Thankfully I anticipated that question, and had packed up her SLR (a Canon 20D) when gathering my gear earlier in the day.

After picking my spot out, I helped Callie set up her camera on my tripod showing a different angle of the train approaching.  I figured it would be neat seeing different angles of the same train.  But the big question in my mind was how do we synchronize the cameras so that hers picks up the flashes?  For that I figured we’d rely on the “voice activated camera trigger” – which consisted of me yelling out “OPEN!” just before I fired my camera and the flashes, then instructing her to close the shutter just as soon as she saw the flashes pop.

We practiced a few times before the train left the station, to make sure she knew what to do.  With a couple successful frames done, we waited for the train’s departure from Essex.

A few minutes after we heard the whistle to the south, it was showtime.  The crossing bells and lights began, and the train came into view.  As they were whistling through the crossing, I yelled at the top of my lungs “OPEN!” and waited a moment for her to do it.  Hoping she pressed the button on the remote shutter release, I fired my camera – albeit a touch later than I had wanted to.  But a review of both of our LCDs showed that we both got the shot!  She held the shutter down a bit longer than she should have, causing the headlight of 3025 to streak out of the frame.  She was still happy with the result – and her father was beaming with pride!

Now to wait about 30 minutes for the next train to load up their passengers and leave the station.  During that wait, we adjusted our positions and went over the drill again about the open and closing of the shutter, as well as why the headlight streaked across the frame.

After our wait, it was time for Act 2!  Both of us got into position, and like before I yelled “OPEN!” waiting a fraction of a second for Callie to open up her camera shutter before firing my camera and the flashes.  As the flashes were recycling and the train was loudly clickety-clacking on by I heard Callie’s voice over it all – an excited “SUCCESS!!  SUCCESS!!” was all I heard as I saw her jumping up and down.  I bent down to check out her shot – much better timing, and she was obviously happy with her results.  After a high-five and a hug, we decided to end the night on a high note, and break down for the evening.

After I did some quick processing of the photo at home, she asked me if we could print it so she could hang it on her wall.  Of course we could – our next project is to mat and frame the 11×17 print I did for her to hang on her bedroom wall.

As a side note, I had given the railroad advance notice as to where I’d be set up to shoot them after dark.  The operations manager alerted the crews in advance so they would know where to expect me.

Scroll down for the four photos from the evening. 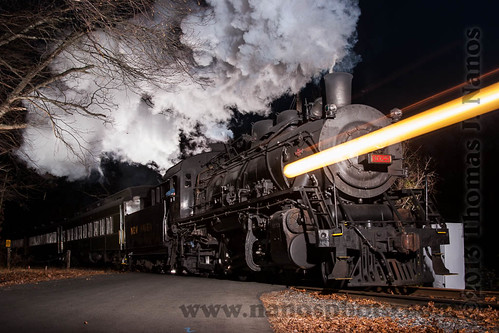 Callie's first shot
My 9 year old daughter's first night photo. The streaking headlight was a result of our manual camera sync of her opening the shutter before I fire and closing it when she saw the flashes go off. See the entire story behind these photos here on my blog: wp.me/pa7uL-TL 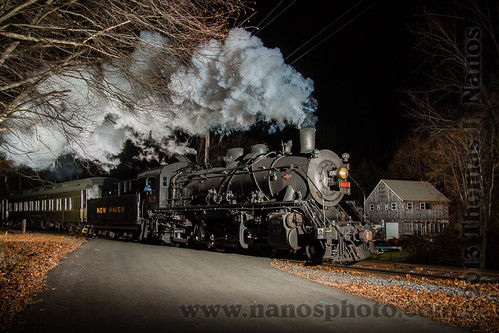 NPE-1 at Old Deep River Road
My first shot of the Valley Railroad North Pole Express season. See the entire story behind these photos here on my blog: wp.me/pa7uL-TL 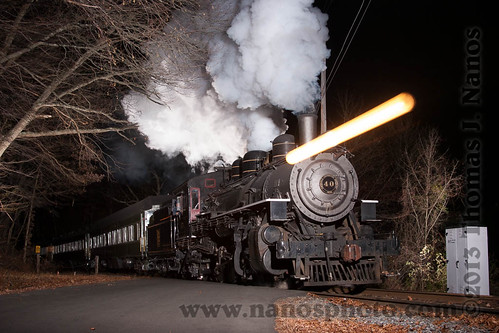 Taken by a 9 year old
Callie's second shot of the night, showing Mikado No 40 pulling the second run of the NPE over Old Deep River Road crossing in the Centerbrook section of Essex. She got the timing down a little better than her previous shot - but they're both awesome pictures, especially for her first time shooting at night! Proud Daddy Moment! 🙂 See the entire story behind these photos here on my blog: wp.me/pa7uL-TL 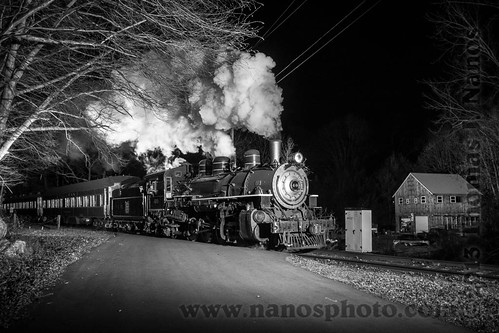 NPE-2 at Old Deep River Road
My second photo of the night, showing NPE-2 heading towards the North Pole. See the entire story behind these photos here on my blog: wp.me/pa7uL-TL