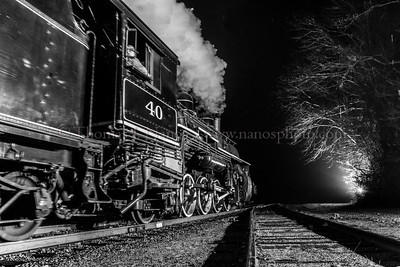 First off, I want to wish everyone a happy and healthy new year.  Hopefully everyone had a safe and joyous Christmas and holiday season.  And to kick off the new year, I figured I’d pull together a recap of my 2013 photographic ramblings along the rails of the northeast – well, one favorite from each month, that is.  Last year wasn’t exactly a stellar year for shooting, quantitatively speaking – only managing to get out a few times a month over the entire year, but I did get some decent stuff in those limited times trackside – including shots of CSX, Norfolk Southern, Providence & Worcester, PanAm Railways and the Valley Railroad.  I went through and picked out my favorite shot from each month of the year, and I figured I’d talk a bit about each one here.  So grab your favorite beverage, sit back and enjoy what you’re reading and seeing! My favorite shot from the first month of 2013 was taken in the late evening in West Springfield, MA.  Earlier in the day I visited the Big E which hosted the annual Amherst Railway Society’s Big Train Show.  After checking out models I couldn’t afford, and catching up with friends who I rarely get to see in person, I headed out shooting for the evening.  After catching an Amtrak heritage unit on the eastbound Lake Shore Limited, I caught a freight working West Springfield yard – CSX train L-017.  This shot was my favorite of the bunch – taken purely in ambient lighting, but also having some of that light highlighted by the diesel exhaust wafting through the winter air.

February brought the area some snow just before the Valley Railroad was to run their annual special up the Connecticut River – the Eagle Flyer.  So in advance of the train’s scheduled dates, they ran a plow extra with their double-ended former HT&W snow plow.  Along the way, they encountered some downed trees across the tracks, making the trip north to Haddam slow going at times.  I was able to catch one of these slowdowns near Old Deep River Road in the Centerbrook section of Essex where the crews were out in front of the plow removing the trees in the knee-deep snow.

I had to head to north Jersey for work in March, so as usual the cameras came along for the ride.  I managed to get out and shoot a few times while I was down there, but the last day of the trip had something interesting in store.  While at Bethlehem, Penn. checking out the Norfolk Southern yard there, a Loram railgrinder was sitting in the yard waiting to enter Allentown yard.  That in and of itself is pretty interesting, but not long after I got there, an eastbound freight left Allentown, crossing the Lehigh River and passing right by the railgrinder, in the shadows of the former Bethlehem Steel blast furnaces.  Just an interesting scene.

In April good friend, and fellow photographer Bob LaMay and I decided to chase a passenger special on PanAm Railways.  The train originated in Boston, and was headed to Mechanicsville, NY.  We decided to start our chase in East Deerfield, and head as far west as we felt we could safely do.  That terminus ended up being the west side of the Hudson River.  But my favorite shot from the entire three-state chase was only a few miles west of where we started – in Charlemont, Mass.  I decided to frame up the approaching passenger train – powered by PanAm’s business train FP-9As – between a pair of telephone poles as they rounded a curve.  Also visible in the background is a number of cars that were part of the huge railfan chasing entourage. May brings us back closer to home – or work as it really was.  On a now somewhat rare occasion, I was able to head out during the day to shoot Providence & Worcester train NR-2, and for my favorite shot from May, we see the train pulling across Amtrak’s Shaw’s Cove swing bridge in New London, Connecticut.  A classic scene of the freight heading west under the wires of the Northeast Corridor.

The summer started out with another shot of the P&W – this time further north along the Thames River.  The shot I selected for this month showed a rather long NR-2 stretched out in two towns – Preston to the north and Ledyard to the south.  Sure, it’s a shot I’ve taken many times, but with the slight haze in the air of the background, it really adds some depth to the photo. In early July Amtrak was to begin replacing a bridge along the Northeast Corridor, so to facilitate that P&W train NR-2 – historically a daytime job – was moved to nights.  With an on duty time of 7:00PM in Plainfield, that afforded many opportunities to shoot the freight under cover of darkness along the Thames River, as well as to the west on Amtrak.  One particular night, my daughters wanted to come out and help me with the shoot – on one condition, that they could be part of the photo.  How could I pass that one up?  So we set up near milepost 7 on the P&W’s Norwich Branch, in Ledyard, Connecticut.  A fisherman decided to join us, so I made him a part of the shot as well.  The icing on the cake, for me, was that the engineer of the passing freight was looking out the window at the girls just as I took the photo, adding some human touch to the shot.

In August a friend from Missouri was out this way on vacation, and we decided to meet up to do a little shooting while he, his wife and another couple were in the area.  Initially we had planned on shooting the P&W and possibly the NECR, as well as Amtrak and Shore Line East.  But about an hour before we were to meet up, I got word that the Valley Railroad would be running a double-headed steam train for at least one of the afternoon runs.  When we met up in Willimantic, we decided to head down and catch the rare double-header.  My favorite shot was of the runaround at Deep River Landing, where both of the Valley’s Mikados – No 40 and 3025 – disconnected from the train preparing for the trip south to Essex.  What made this shot different is that I climbed up onto a small rock shelf along Tate’s Cut and worked the riverboat into the frame.  The other special thing about this is that the Valley Railroad is using this photo as a part of their 2014 brochure!

For September we once again head back to the Norfolk Southern Lehigh Line on another business trip to north Jersey.  But instead of a shot in Pennsylvania like before, I picked out a shot right on the New Jersey/Pennsylvania border – in Phillipsburg, NJ.  But it wasn’t any old NS freight – it was one led by a Heritage Unit, the Lackawanna.  While I was there, friend and fellow photographer Bill Willis was also working in NJ, so we met up and caught the train – along with a bunch more in the area.  For me, the sky makes this shot – taken a little while before sunset, facing into the sun, which was shrouded by some interesting clouds to the west.

October brings us another NS shot – and also taken in the shadows of the former Bethlehem Steel blast furnaces.  This was on my way home from another trip – this time to the Philly area.  I took the scenic route home, and went through the Emmaus and Bethlehem, PA areas to see what I could see around dawn.  The only train I saw while there was the eastbound Roadrailer – NS train 262.  This particular shot struck a chord with me – I loved how the blast furnaces totally dwarf the entire train, making it look like a model.  Just shows the massive size of the former steel plant.

November brings the start of the holiday season, starting with Thanksgiving.  But also along with Thanksgiving, that brings the start of the Valley Railroad’s North Pole Express Christmas themed trains.  The NPEs run after dark most nights between Thanksgiving and the end of December, so I’ve got plenty of opportunities to head out and hone my nighttime photography skills.  Prior to the start of the 2013 season, I had an idea in my head about adding a little blur to flash lit night photos – basically using modern strobes to simulate a flashbulb (I’ll put another blog post together with the entire idea, and my technical solution in the near future).  And the photo I picked out for November was taken on the night I tested my “gizmo” – of Valley Railroad No. 40 heading northbound in Chester, Connecticut.

In the final month of 2013, the night photos at the Valley Railroad continued – and I kept on trying new ideas.  One evening I decided to try something really out of the ordinary – keeping the front of the train dark, while lighting up Santa’s Village with the flashes.  The shot for December I picked out is titled “Embraced by the Dark” – where Deep River Landing, dressed up to be the North Pole for the trains, looked more like an elaborate model instead of the real thing.  For me, putting the flashes behind the nose of the locomotive made the shot – it added some mystery to it, and the slight glint on the rails from the headlight ahead of the train, put the finishing touches on it.

Thanks for reading, and I hope you’ve enjoyed what I’ve shot over the year.  It sure was a different year for me – less quantity of photos, but I think more quality.  As always, feel free to comment on anything either here in the comments section, or just drop me a line using the contact form.  I’d love to hear what you think of my picks for the year!