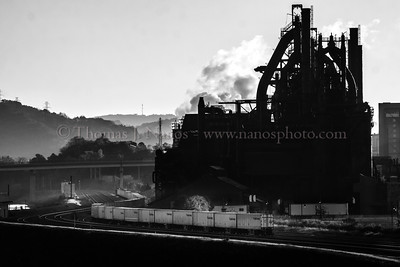 Digging into the photos from this last fall for this post – like I’ve mentioned in other posts before, I have been out shooting, just not as often as I used to, and unfortunately I haven’t been posting here much.  So for the next few blog posts, I’ll be reaching back into 2013 for material that hasn’t been posted here yet.  But we’ll be working on that…  For this one, we’ll go back to a stop I made on my drive home from a business trip to the Philadelphia area.  Yeah, I took the scenic route through Bethlehem, PA, hoping for some early morning Norfolk Southern action.  Thankfully I got one train moving through the yard along the Lehigh River.

The pre-dawn wakeup on a Friday was pretty tough, but I figured it would be worth it.  The weather forecast for the eastern part of the Keystone State called for clear and cold skies – it should make for a nice sunrise over the old Bethlehem Steel blast furnaces.  After checking out of the hotel, it was onto the highway to make my way north and east of the Philly area towards the western end of the NS Lehigh Line.

I got into Bethlehem just before the sun popped up over the horizon and was greeted by something I had hoped I wouldn’t see – an empty yard and a quiet scanner.  Nothing was around, and it sounded like there was nothing but the hump switcher in the nearby Allentown yard working.  But undaunted, I still made my way up onto the Fahey Bridge spanning the tracks and Lehigh River.

Just as I was losing hope, and about to give up I heard a crackly transmission over the radio – it sounded something like NS train 262.  Well, that would be an eastbound Roadrailer that terminates in Bethlehem!  Back to the original plans of waiting…

And waiting I did – by the time 262 came into view, the sun was already well above the horizon, but not by large margin, making for some pretty dramatic lighting.  So before they came into view, I thought out and planned my shots.

First up was a telephoto of them passing under the Hill to Hill Bridge, and snaking through the switches to the west of me. Next was a wider shot of the train, still mostly in the shadows, heading for the warm (warm looking that is – it was still freaking cold) morning light, with some fall color across the Lehigh, and the sunlight glinting off of the shiny rail heads Norfolk Southern train 262 pulls into Bethlehem, PA a little bit after sunrise on a crisp and colorful fall morning. October 25, 2013

That was followed by a longer vertical telephto using the blast furnaces as a major element, and the train arcing through a gradual curve in the yard

And finally the shot I really wanted to get – one that really puts the size of the blast furnaces into perspective.  In this shot I got the entire train into the frame, and it’s simply dwarfed by the furnace structure – looking almost like a model.

Satisfied with what I got, and the scanner once again falling silent, I walked back to the rental car, and completed my trek home.  Well worth the pre-dawn wakeup…