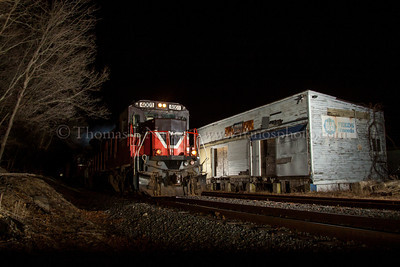 Last night I got word that Providence & Worcester train NR-2 would be making a right hand turn at Plainfield, heading for Willimantic, instead of their usual run down to Groton and along Amtrak’s Shore Line.  With the train’s change in plans, I also changed mine – originally I was set to meet up with a couple other photographers to light up NR-2’s trip south through Ledyard then move over to the Niantic River Bridge on the Shore Line.  Since I really had my heart set on shooting a freight, and with the change in plan of NR-2, I opted to change my plans and not meet up with the others – who ended up sticking around NAN last night.

After filling up the car in Willimantic – both with gas for the engine, and coffee for me – I made my way to Baltic to set up the shot I had in mind.  I really like shooting at the old feed store that is along the tracks in town – there’s some interesting angles possible there, and using the store with the old and faded/rusty Blue Seal Feeds and Purina Feeds signs as props makes for some cool photos.  So I decided on setting up a simple three light setup – two Alien Bee B800s and a single Lumedyne 200 w/s.  Using less lights keeps with what I’ve been trying to do more of lately with my night shots – preserve the shadows.  I’ve shied away from the more “traditional” method of evenly lighting everything in the scene – what some call the “daylight shot with a black sky” look.  I’ve been trying to preserve the “feel” of night in my photos – keeping as many shadows as possible, while also lighting the subject in a way that it doesn’t simply blend into the blackness.

The other thing at play this evening was a field test for something I’ve been working on for a few months – a set of homemade radio triggers that set off the flashes when I shoot the camera.  I’ve had a few shots in mind that would need the triggers to reach close to a mile away from the camera – in order to do that with my current setup (Paul C. Buff CyberSync triggers), I would need to set up at least three repeater triggers to get the signal that far.  Doing something like that would be cost-prohibitive, since each receiver/repeater costs about $70.  Instead, I came up with a custom design that gives me the range I need, while only sacrificing some sync speed (CyberSync triggers will work up to the camera’s sync speed of 1/250 of a second, but mine will only work reliably up to 1/125 – an acceptable difference for what I’m doing), and at a fraction of the price.  I plan on going into the specifics on the triggers in another, more technical post in the future – stay tuned for that.  Last night was simply the short-range field test of the triggers with a moving train – I have done static tests of the triggers at about 3/4 of a mile, and they worked very reliably.

So i got to Baltic, and set up my lights and camera – while I was setting up, I could hear NR-2 working Federal Paper a few miles east in Versailles.  And just as they were wrapping up their work, I completed my test shots of the lighting setup.  If you’re curious, here’s a map of where I placed the lights and camera, and what direction they were all facing.  Each “sun” icon is a flash, the camera is, well, the camera, and the little steam locomotive is the lead locomotive of NR-2 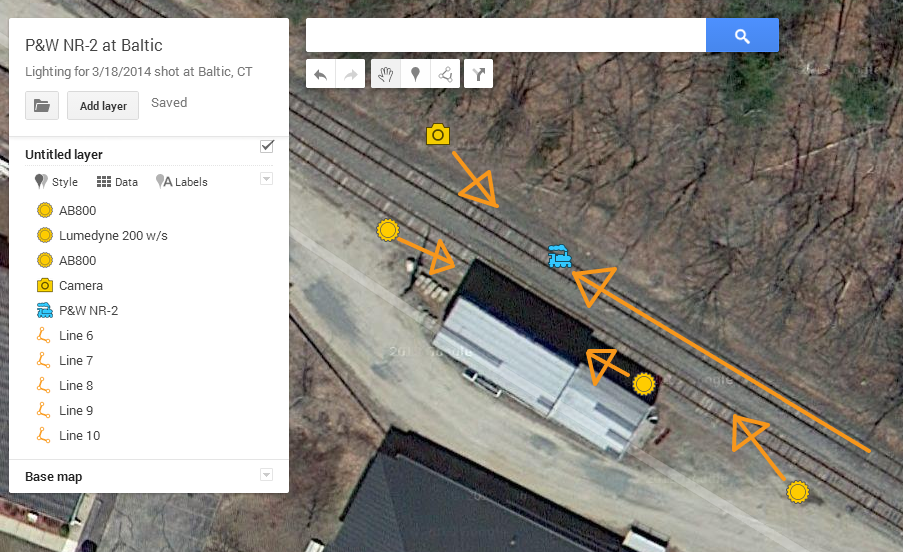 Click photo to see the interactive map on Google Maps.

With everything set up, it was time to wait.  But it wasn’t that long of a wait before the crossing signals up the line activated and you could hear the GEs approaching.  After a couple warning flashes when they came into view, I bagged this shot of NR-2 passing by the old store in Baltic.

Providence & Worcester train NR-2 rolls by an old feed store in Baltic, Connecticut on the evening of March 18, 2014.

With that in the camera, it was time to break everything down and head back home.  One shot, one kill…not a bad night.  And needless to say, the homemade triggers worked flawlessly!  Next up will be a shot with the flashes about a mile from the camera to really test their range…