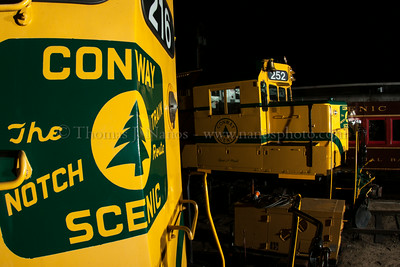 Between the end of June and the second week of July, my family and I took a (mostly) camping vacation through Maine, New Hampshire and Vermont – I’ll be doing an overview blog post on the entire 2+ week trip at some point in the future.  One of those stops was North Conway, New Hampshire to ride the Mount Washington Cog Railway to the summit – as well as let the kids have fun in the water park inside the hotel we were staying in for a couple nights.  One of the nights we were there, I made my way up the road to the Conway Scenic Railroad, meeting up with fellow photographer Bill Willis for a little two-person night photo shoot.  Bill secured permission for us to be on the property for the evening, and I brought a couple of Alien Bees along for lighting.  For the next few hours, we ran around the yard and photographed as much as we could.

To start out, some administrative notes:  Like most posts, you can click each of the photos below to view larger versions, as well as purchase prints.  Please drop me a note if you have any questions about the purchasing process, or if you’re looking for something beyond what is offered on the store site – I’ll try to accommodate any of your requests.  Thanks!

We met up at about 8:30 PM, when there was still plenty of light, despite being a bit after sunset.  This allowed us to survey the grounds, check out where equipment was set up, and plan out our evening.  There were many more obstacles than normal because the railroad was gearing up for a weekend visit with Thomas the Tank Engine – a hugely popular event wherever it travels to.  So with the layout of the equipment, we decided to start out at the south end of the yard, and work our way north towards the roundhouse and turntable area, and wrapping up with a former New Hampshire Northcoast geep stored by the freight house.

Our first shot was at the semaphore signal, so we made our way down there and started setting up.  But when I broke out the Bees, I noticed that one of the battery packs was switched on, and fully drained!  Having no extension cords, and a large scene, I relied on one light for the first shot.  But with the ambient light still filtering through the passing clouds, I went with a longer exposure along with the flash.  I think the shot still worked out in my eyes, despite only having one light.

For the next shot, I wanted to try something quite different – a setup that would have some stark contrast with very bright and very dark areas in the frame, mostly highlighting the geometry of an EMD GP38s nose.  Also, as a bonus, we came across an active 110v AC plug, enabling me to plug my dead battery in for a quick charge.  I figured that even if I could get it up to 1/4 of a full charge, I’d be good for the rest of the night, only running one light off of it.  So while we were doing the second shot, the battery was quietly charging.

For that second shot, I placed both lights to the left of the locomotive, essentially right in line with the front of the nose, so it cast a stark shadow across the far side of the locomotive.  Also there was a generator sitting alongside – which initially we were deriding, but it ended up being a blessing, because I could place one of the lights up to the level of the number boards, and the other was down lower towards the ground.  After a few experimental shots, I ended up with this shot – pretty much what I was going for.

With the same light setup, I went with a horizontal shot, getting some of the adjacent coach

And while were there (and still waiting for the battery to get a bit of a charge), I flipped the lights around to illuminate the railroad’s GP35 on an adjacent track in a similar fashion

By the time that was wrapped up, I checked the battery again – the 1/4 charge indicator came on!  I was now in business to spread the lights out through the scene.

For the next shot, I set it up so both the GP38 and GP35, along with the coach, were all hit by the Bees, but still maintaining some dark areas around the frame. Conway Scenic locomotives 216 and 252 wait quietly in the railroad’s North Conway, New Hampshire yard for the next day’s excursion trains.

Satisfied with what we got there, I started contemplating our next move…but when I was just about to break the flashes down, the proverbial light went off above my head for a crazy idea.  I went for a wider shot, getting the Conway Scenic logo on the nose of the 216 in the foreground, with the entire nose of the 252 in the background.  I took a test shot with my 18-50mm lens attached, and it didn’t work – it cut off too much of the logo, and was too tight on the nose of the 252.  So I made the switch to the 15mm fisheye – much better framing!  With a couple quick tweaks of the light positions, I ended up with this keeper of a shot. Had an impromptu night shoot on the Conway Scenic Railroad. One shot of the pair of MEC inspiried geeps in North Conway, NH

With that in the bag, we grabbed all of our gear and made our way to the roundhouse and turntable.

With the Thomas event approaching, the railroad set up equipment around the turntable as a display, with the centerpiece being former Boston & Maine EMD F7A 4266 on the turntable.  The first shot I set up was on the south side of the turntable, showing some of the railroad’s equipment sitting quietly under the now clearing skies (if you look carefully, you can see the setting moon just above and between 7470’s domes).

From there, we moved into the first stall of the roundhouse to get shots of the F7A with a backdrop of the other equipment.  I took the opportunity to get a shot of Bill doing his thing from a bit further behind him. Then I moved outside to get my shot of the lineup.

A series of Conway Scenic equipment at the North Conway turntable

Followed by a different shot, highlighting 4266s nose logo with 501 in the background Moving lights around a bit, gave us the opportunity to also include 7470 in the fun, with this shot of 4266 in the foreground

Conway Scenic 4266 rests on the turtable as 7470 sits quietly on a stub track.

Happy with our results around the turntable, we moved into the darkest reaches of the roundhouse where a little blue engine was resting up.  Yep, we also photographed Thomas waiting inside the roundhouse.

After getting our frames of the tank engine, we moved to the northern end of the yard for our final shots – photos of the former New Hampshire Northcoast high nose GP-9.

At that point my batteries were getting a bit low, and it was getting late.  So we decided to call it a night at this point – Bill continued home to his family, and I went back to the hotel to join my family for the rest of our trip.

2 thoughts on “A Night in North Conway”