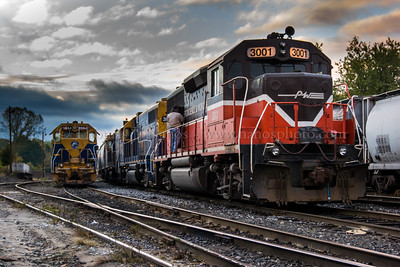 As you can probably tell, I haven’t been able to head out and shoot much of late – for a number of reasons.  So instead of letting things further stagnate here, I decided to go back in time and dig out some older photos I took before I implemented the blog (first blog post is from February 2007).  And for our first edition of X years ago today I present you a brief chase of the New England Central Railroad between Palmer, Mass. and Willington, Conn – with a little bit of Providence & Worcester, CSX and Mass. Central thrown into the mix for good measure – as I photographed it on October 24, 2005.

Back in 2005, the New England Central Railroad was a bit power short, so they would from time to time lease power from other nearby roads to get them through.  On the day I headed up to Palmer, there was a Providence & Worcester GP-40 on the property, and the 608 was going to take it south with their train. Back in 2005, the New England Central Railroad leased one of the Providence & Worcester’s GP40s during a power shortage. Here the crew of train 608 is getting ready in Palmer, MA before heading south to Willimantic with their train.

After getting the power together, the conductor waited for the engineer to move out onto the main, where they could start assembling their train.

A New England Central Railroad conductor waits at a switch in the railroad’s Palmer, MA yard as his engineer pulls his power out onto the main.

A quick drive to the south end of the yard caught them working on assembling the southbound cars, destined for Willimantic.

A look at the south end of the New England Central Railroad’s Palmer, MA yard as NECR train 608 prepares to head south to Willimantic.

As they were moving cars around that end, I headed back up to the diamond area – where CSX”s Boston Sub crosses the NECR – hoping to catch something different.  Well, different is sure what I got – the Massachusetts Central local was working the CSX interchange yard north of the CSX main.  And as they were shoving cars around, a CSX local approached from the east as light engines.

A Mass Central local works the CSX interchange as a CSX light engine move approaches on the controlled siding.

I noticed that the light engines were slowing down on the controlled siding – that meant one thing, that there should be an eastbound due by any time now.  Well, within a matter of seconds, I heard that eastbound behind me.  So I spun around, and caught them crossing the NECR diamond. An Eastbound CSX freight crosses the diamond in Palmer, MA

Then another quick 180 to catch the 3-way meet Now that I filled up my quota of different, I headed south to chase 608 as they made their way towards Willimantic.

First stop was the waterfall near Bliss Street in Monson, Mass – and the fall foliage sure helped!

Next up was a run to the crest of the State Line Grade in southern Monson – nearly to the Connecticut state line.

The final shot of that day was near milepost 48, where Stafford, Ellington and Willington meet.

Satisfied with what I got on the camera, I headed home instead of continuing the chase south to Willimantic.

Stay tuned for the next edition, and thanks for looking!
Tom