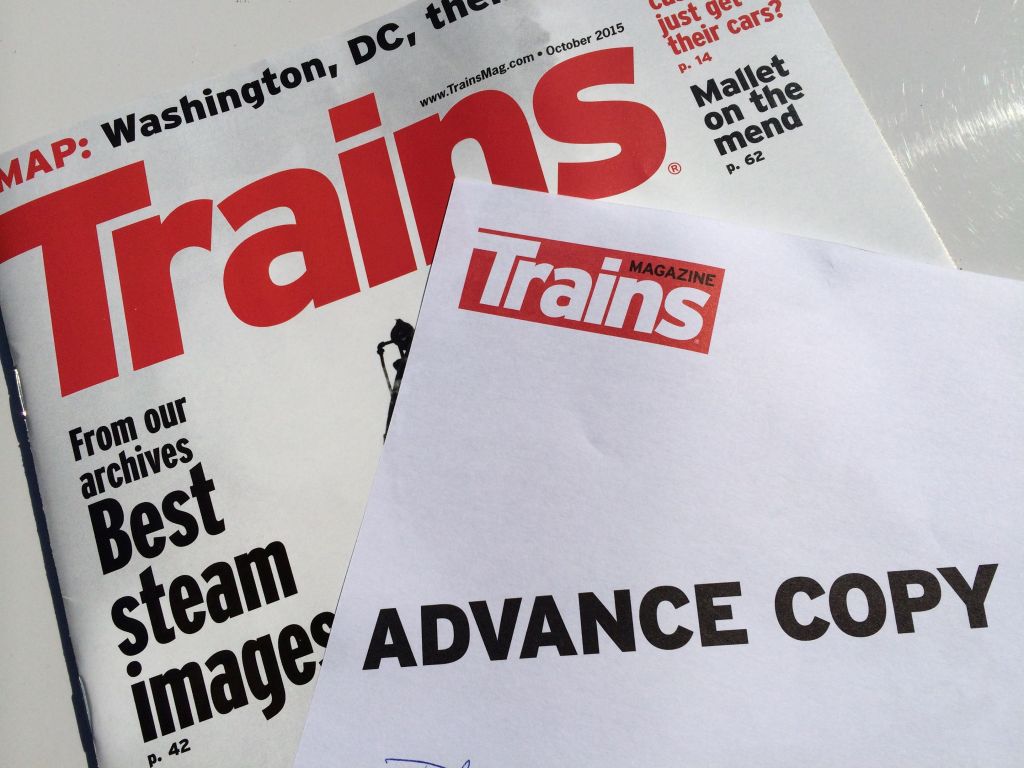 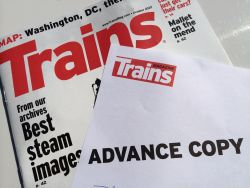 Imagine getting some great news that you’d love to share with everyone you know (and even more), but you can’t for a couple of months.  Well, that happened to me recently – and I’ll tell you, it’s been pretty hard keeping my yap shut.  A couple of months ago, I got a call at home from Kalmbach Publishing – at the other end of the phone was the Production Editor or TRAINS Magazine with some news…

Angela Pusztai-Pasternak, the TRAINS editor in question, called to congratulate me for winning the Second Prize (which is actually third place, behind the Grand Prize and First Prize winners) in the magazine’s annual photography contest!  But there was one string attached – I couldn’t say anything about winning the prize until the October 2015 issue was released.  Obviously the magazine wanted to keep things quiet, and have a much bigger splash for the winners when the printed copies hit mailboxes.  Which was especially hard for me for one main reason – this was the first major, juried photo contest I entered where I ended up placing (I’ve received “Judges Also Liked” honors – essentially a runner up – in two of the Center for Railroad Photography and Art’s annual Creative Photography Awards) – hell, I came in third place out of over 700 entries.  That’s not too bad!  So despite my obvious excitement, my mouth (and keyboard) remained quiet…until now.

Yep, as you can tell by the lead-off paragraph, I got my advance copy a couple weeks ago, issues are now arriving at subscriber’s mailboxes, and retail versions are making their way to hobby shops, book stores and news stands across the country as I type this.  So here’s a little sneak preview for you, the faithful readers of my blog.  Granted, it’s a low-res, cellphone snapshot, but it gives you a feel for the photo.  But to get the full impact – and to see the other winners of the contest, pick up the issue when it hits retail outlets (should be soon – most hobby shops and larger retailers like Barnes & Noble and Walmart do carry TRAINS).  Speaking of the other winners, the two gentlemen that placed ahead of me are both excellent photographers, and I truly admire their work – and the Grand Prize winner is a friend from Missouri, with whom I speak with often about subjects around photography.  We even got a chance to shoot together for an afternoon a couple years ago, where I gave him, his wife and a friend of his a quickie tour of southeastern Connecticut’s railroads.  Anyways…here’s my shot, spread across two pages of THE Magazine of Railroading. 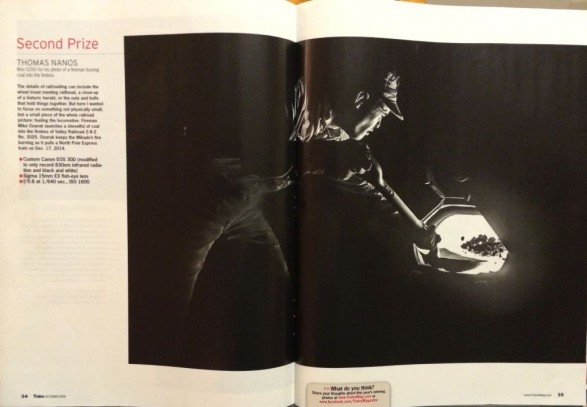 After some emailed requests, I’ve made prints of the photo available up on the store site.  Simply click the thumbnail below to be transported directly to the photo.  As always, all purchased prints will not contain any watermarks – just the photo.

Valley Railroad Fireman Mike tosses a shovel-full of coal into the firebox of Mikado No. 3025 as the train pulls a North Pole Express. Taken with an black & white only and infrared modified Canon 30D.

Thanks for reading, and thank you to the judges and staff of TRAINS Magazine for this honor.  I’m truly humbled to not only have placed in the 2015 contest, but also to be included with other great photographers in this hobby.