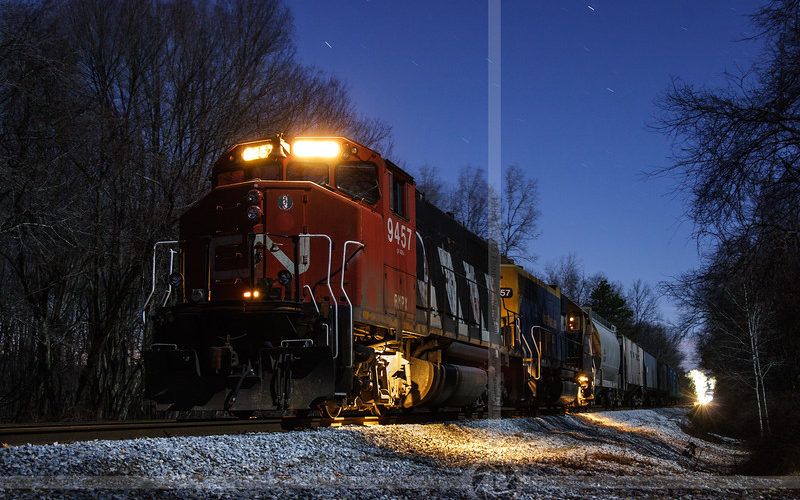 Let’s jump into the (not-so) wayback machine for a moment today, and go back exactly nine years ago – to December 4, 2006 (and about the same time as I’m posting this), where I had a pretty unique photographic opportunity.  Something unusual happened on the New England Central Railroad in Mansfield, Connecticut, and I would end up being able to photograph a good portion of the after-events.

During the day of December 4th, a southbound NECR freight left Palmer, Massachusetts heading for Willimantic.  This particular job would eventually go as far south as Franklin where they would meet up with another NECR freight train – usually in the Franklin area – and swap cars.  After they swapped, they turned and went back the ways they came.  Well, on the 4th, the southbound job out of Palmer never made it to Willimantic – well, in one piece.

Just south of where the NECR main crosses under Route 31 near the Coventry town line, the train derailed at least a half dozen cars – some ending up on their sides.  There were two pluses to this situation – first, thankfully the cars that derailed were further back in the train – the six cars on the head end, and the two locomotives that were powering the train stayed on the rails, which means nobody was hurt.  And second the loaded hoppers contained grain and soybeans – nothing hazardous was spilled.

Where this happened was in a fairly easy place to access – not far from home, and only a short walk in from the shoulder of Route 31.  By the time I got there, one of the local photographers from the Willimantic Chronicle was already on the scene getting her photos (yes, I know her…) – so we chatted for a bit in between shots.  It was an impressive thing to watch – at a distance, of course.  The crew from RJ Corman was methodically preparing to right a car that was on its side – first by opening the hatches to let some of the grain out, then by lifting it a bit to get more out, lightening the car enough for the sidewinders to rotate it back into position, and onto its trucks.  Very interesting to watch.

After an hour or so on the scene, I figured it was time to head back home – I got a pretty unique look at the re-railing and cleanup process from a derailment.  Here’s a look at a few select photos from the night.  You can click on each to go to a larger version of the photo…and of course, if you’d like, you can purchase prints of any by clicking the button in the lower right corner of the window.